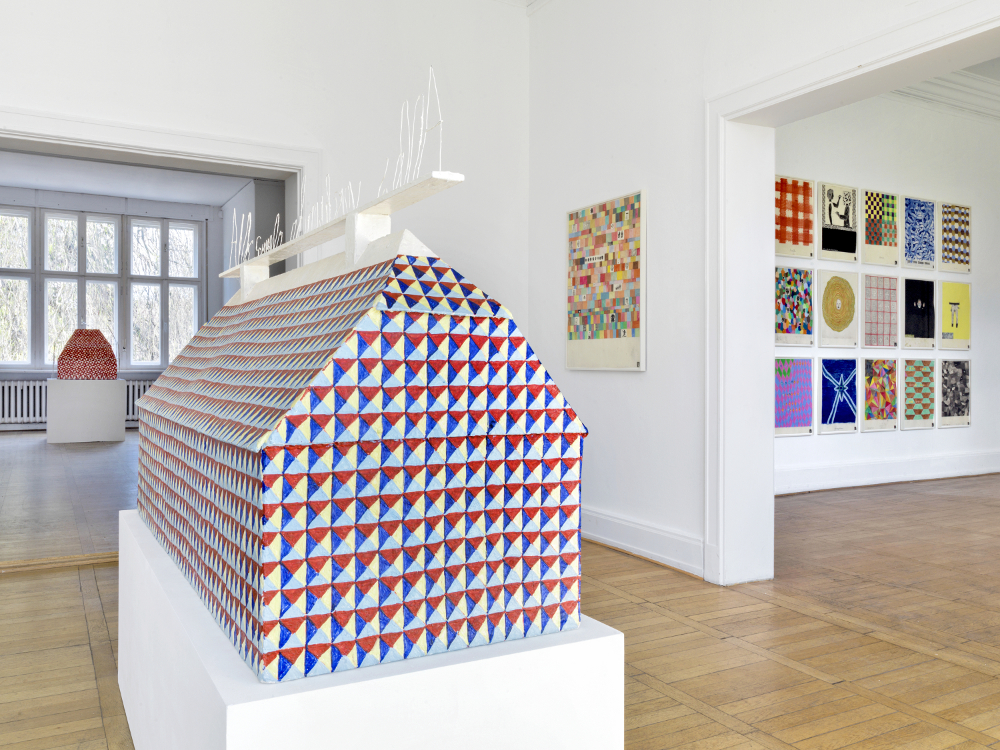 Martin Assig’s drawings shine with laconic words and sentences, to which he matches abstract patterns, faces, bodies and clothes in order to let intimate insights, remarks and quotes of the day speak mutely to us. Possessed of unusual patience and perseverance Assig, born in Schwelm in 1959, now a Berlin resident, creates in his graphic works sheets that unfold a great inner splendour in a small space, targeting directly the very essence of life. The exhibition “Glückhaben” (being fortunate) presents, among other things, over 200 works on paper from his extensive group of work named St. Paul, a series that has been conceived as a tribute to Paul Klee and has kept growing since 2009.

Assig plays on the notion of the mediaeval anonymous artist who submits to a higher ideal and surveys his own work with a sense of wonder, as though from the outside. In his drawings he translates his own handwriting into colourful, abstract lines, forms and patterns, bodies and objects.

Sheet after sheet develops in patient work processes, as if they were liturgy of the hours in mediaeval manuscripts or comic strips. They originate in the daily stream of perception, of hearing and thinking, seeing, sensing and reading, leading to a field beyond efficiency and maximisation of profit. Wisdom gained through experience condenses here, appearing to be both supratemporal and profane. Openly they pronounce the innermost mysteries of love and death. At times they seem heavy, at times light. Particular words obtain visibility: hope, humility, tragedy, memory, certainty, eternity, mercy…

The majority of the drawings draw on religious traditions, on folklore, rituals, body-awareness, literature, music and philosophy. Whether it may be Marguerite Duras or Johann Sebastian Bach, Edvard Munch or Paul Klee, Russian literature or his own fate – each new sheet drips with precious thought-nectar that runs from the studio in the countryside just outside Berlin into the art-circulation of many a metropolis.

The exhibition at Haus am Waldsee shows architectural sculpture next to numerous drawings, all of them full of sensual as well as spiritual force.

A catalogue has been published in German and English with Verlag Walther König. It features essays by Björn Vedder and Durs Grünbein as well as an introduction by its editor Katja Blomberg.

The exhibition will be on view at Museum Boijmans van Beuningen in Rotterdam from February 6 to May 29, 2016.

Supported by the council of Steglitz-Zehlendorf of Berlin; additional funding by the Governing Mayor of Berlin – Senatorial Office – Cultural Affairs; the association Friends and Supporters of Haus am Waldsee e.V.; Gembus Foundation