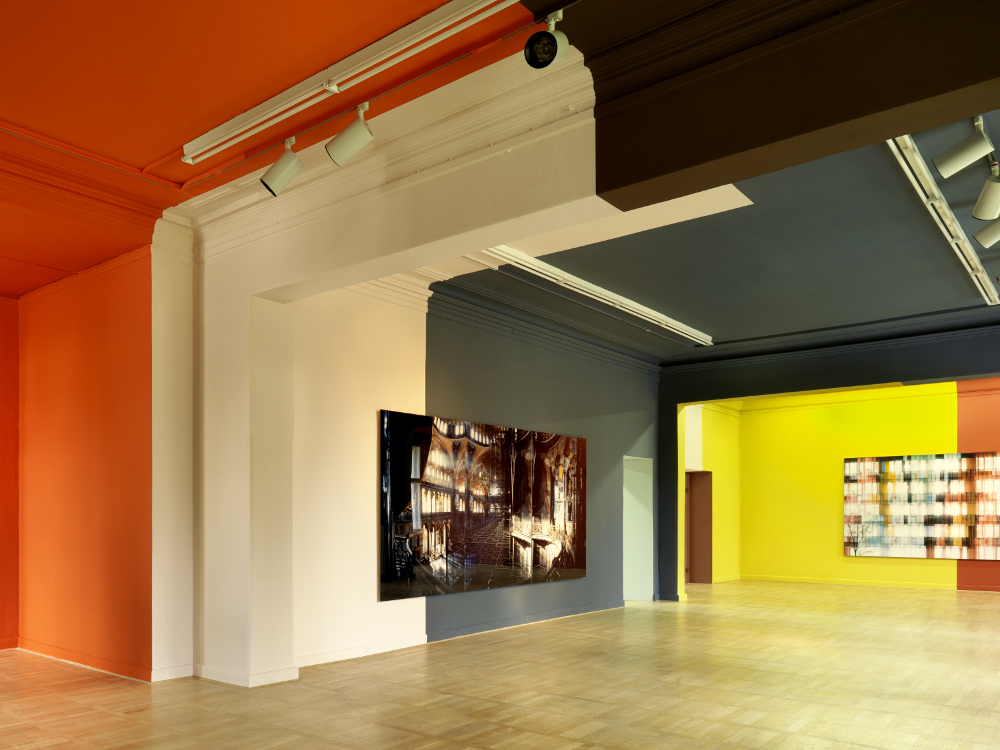 In an installation by Sauerbruch Hutton

The Finnish artist Ola Kolehmainen (b. 1964, lives and works in Berlin) traces the great architects in his photographic work. Not only the architectonic monuments of European Modernism built by Alvar Aalto, Mies van der Rohe, Frank Gehry, Sauerbruch Hutton, but also the Hagia Sophia or mosques built by Mimar Sinan from the 16th century, serve as the starting point of his reflections.

Kolehmainen´s earlier work is stimulated by the geometric structures of façades, the grid design of ceilings, their reflective windows of the selected icons of building history. His minimalist, aesthetic practice, which was strongly influenced by James Turell and Carl Andree sets in at the point where nature meets architecture in the form of reflection. It thrives on both structure and the chromaticity of architecture, building history and the site-specific light.

After long and meticulous work processes, in which Kolehmainen explores the life of the architect, the role of the specific building for the architect‘s body of work and its effect on other architects, the artist eventually detaches his photographic work from the original in order to tackle the overriding questions: what do we see? What does the camera see? What is real? The results are images devoid of human figures full of peace and quiet.

In the spring of 2013 Kolehmainen has undertaken a professional journey to Spain during which he expanded his dialogue with architecture by using new perspectives. Now, not only façades but light and cast shadows inside buildings have taken on a crucial role. His technique consists in composing multiple views in a single negative, layering them into heavily abstracted originals that are built from geometric, colourful light phenomena. They exert a strong painterly effect. “Geometric Light” one of his most recent series recall the constructivist paintings of for example Paul Klee or Frantisek Kupka as well as the transparent objects of Naum Gabo.

Kolehmainen has already abstracted buildings in his earlier work, paring them down to the ornamental surface. The new works from Istanbul, where the artist worked on the osman architecture of Mimar Sinan and inside the Hagia Sophia, feature an added narrative component. The mediaeval structure built by Sinan were of great significance, e.g. for the work of Alvar Aalto. Moreover, Kolehmainen is interested both in the overwhelming incidence of light in the oversized building and such objects as scaffoldings or chandeliers which he deliberately integrates into his compositions. In these recent series, again, the artist reduces aspects of the buildings to an abstract basic statement. By multiplying perspectives in a single image he constructs complex, disturbingly beautiful vistas full of tranquillity and grace.

For the exhibition at Haus am Waldsee Matthias Sauerbruch and Louisa Hutton created a colour system to accompany Ola Kolehmainen´s first solo show at a Berlin art institution.
Subsequently, the show will travel to PM in London during summer 2014.

A catalogue has been published in German and English by Verlag Walther König.

Supported by the council of Steglitz-Zehlendorf of Berlin; Capital Cultural
Fund; additional funding by the Governing Mayor of Berlin – Senatorial
Office – Cultural Affairs; the association Friends and Supporters of Haus am Waldsee e.V.