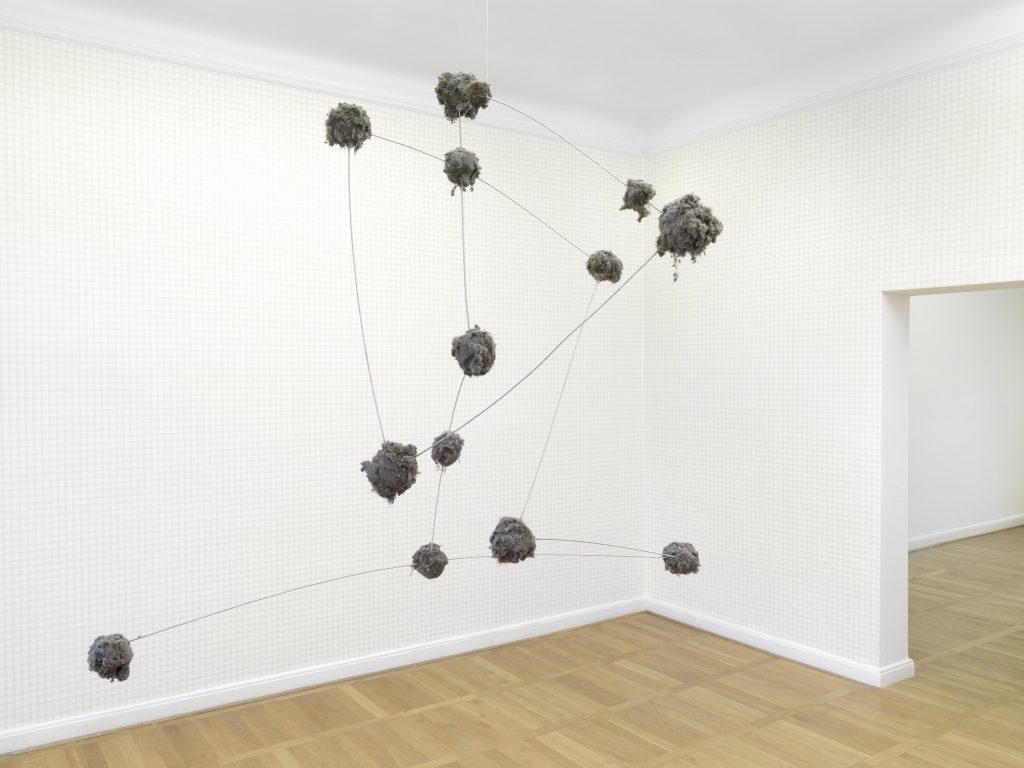 Under the title “Music Box,” Haus am Waldsee presents Dutch artist-composer William Engelen (b. 1964 in Weert) his first solo exhibition in Berlin.

Chocolate bars, the contents of vacuum cleaner bags, rubber plants, diaries, stomach rumblings or weather data form the parameters of William Engelen‘s compositions. When the Dutch artist and composer designs his scores using graphic notation, his work, more often than not, is based on collective cultural memories on various levels of perception. They range from the Big Bang to the chocolate dreams of his own childhood. They make use of the weather data of the early 21st century or capture the unconscious musicality of our intestines.

His work oscillates between the visual arts, architecture and music, between exhibition and performance, between installation, sculpture and composition. The results are temporary musical hybrids that are mostly transient and almost impossible to reproduce on account of their particular site-specificity. A reconciliation of the irreconcilable, of statics and dynamics, existence and passing away, space and time, takes place before the visitors‘ eyes.

Engelen‘s compositions do not proceed from notes and measures. Rather, he works with parameters which are tied to situations that derive from the interaction of the visible and the auditory. He emphasises: “Whenever I ‘use’ time, I compose by means of sounds and noises, objects and space. This leads to something that is multi media. By allowing the musicians a say creatively, my graphic scores become compositions of human activity.” As a rule, everyday situations form the point of departure. Sometimes it is sites and objects such as a garden plot or an allotment, an empty house, a concrete wall or a dusty piano. It can also be documents of a life lived such as diaries or biographies or even more general circumstances like the weather, for example.

Engelen is part of the tradition rooted in 20th century new music, and as such not only open to listening without hierarchies, but equally at home in the tradition of the happening when he actively engages his audience in his performance-based sound installations. Thus he has interviewed some of his contemporaries for his piece “Fräulein Grosch” on their experiences with their first piano teachers. He recorded their reminiscences and presents them in an a audio-loop together with related photographs of pianos and people – as convention dictates that piano lids should not be without them – as an installation piece on the bourgeois ritual of the piano lesson which renders the individual‘s torment comprehensible in terms of a collective experience.

His experimental world of sounds and noises clearly stands in the tradition of John Cage and Morton Feldman who rejected the permanent reiteration of classical composition as kitsch and expanded both the mainstream classical instrumentarium by everyday items such as lids and notation by a new system of abstract signs. Willingly, Engelen pays tribute to the American innovators, not least by exploring new ways in creating sound experiences for the 21st century. In doing so, the visual and sound artist moves on a more global, transcultural and even wider technological basis than either of his great idols did eighty years ago.

“Music Box” was developed for Haus am Waldsee in close cooperation with the artist, to enable visitors not just to catch a glimpse of the entire range of William Engelen‘s experiments from the 1990s to this day, but also to introduce them to the innovative energy of his work between composition and installation, between sounds and spaces.

The exhibition puts on display the complete spectrum of his œuvre, covering various media such as graphic score as visual music by way of audio samples, sculpture, models as well as sound installations.

A catalogue in German and English accompanying the exhibition is published with Verlag Walther König.