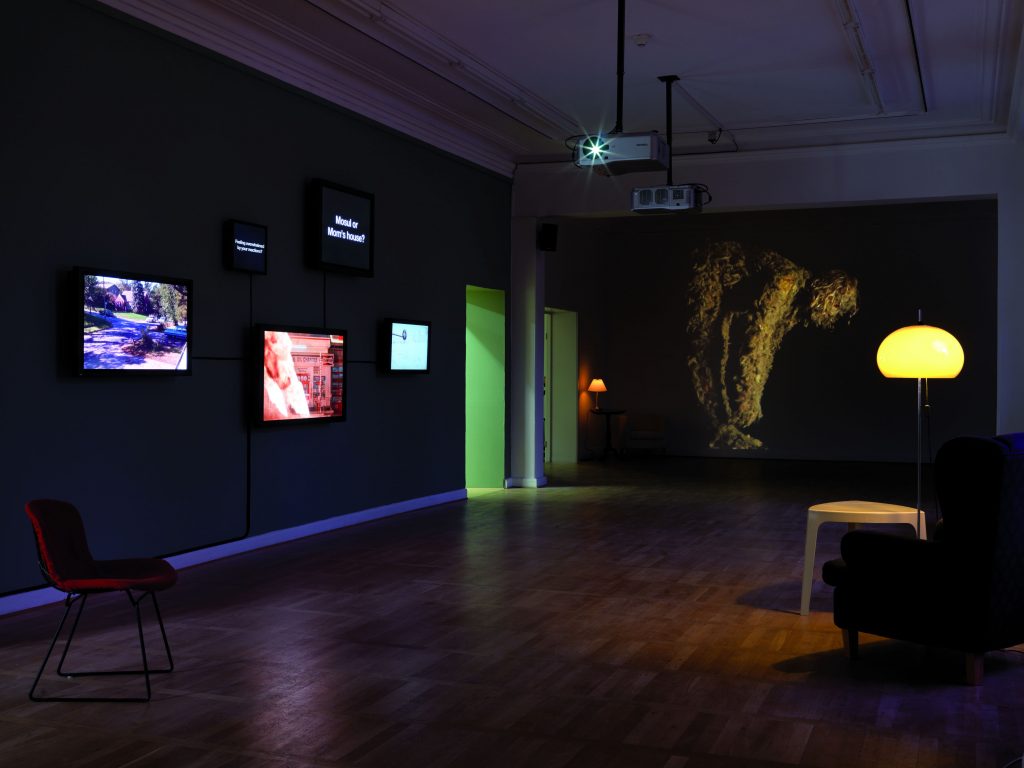 Parallel to the 61th Berlinale 2011, Haus am Waldsee presents the first comprehensive survey of the German born Norwegian video artist Bjørn Melhus (b.1966). Standing on the shoulders of such giants as Nam June Paik and Bruce Nauman, the internationally acclaimed artist concentrates on the absurd sides of cinema and television. Initially trained as a filmmaker before switching to the visual arts, Melhus remains part of the media world, which he analyses, deciphers and encodes anew within his own movies. The video artists who teaches in Kassel is not only a critical observer but also always embodies the responsible agent in his works when he stages his mostly humour-laden game of duplicity on the basis of sound-bites and his own film footage.

Ever since Neil Postman’s efforts, the phenomenon of society’s medialisation has been analysed interms of the intrusion of television, film and video-clip as substitutes for communication andexperience. The human being has been transformed into a passive consumer of mass-producedmedia fare. The distinctions between entertainment, dream, trauma and information become increasingly blurred. Ready-made sound-bite meanings are being served up around the clock. Experiencing the real world seems to have become redundant. Against this background, Melhus builds his own fables and stories from fragments taken from theworld of motion pictures assembled by association into collages of sound and image. In doing so, heconsistently plays all the roles himself and underlays them with a soundtrack of famous, mostlydeceased movie stars whose male and female voices and statements the artists puts into his ownmouth.

Since “Zauberglas” (magic glass, 1991) or “Again and Again” (1998), his core concerns arequestions of personal identity, where we come from and where we go to and the boundary between oneself and the media world. The exhibition “Live Action Hero” provides evidence for this while alsocovering his entire oeuvre to date, a period of twenty years. The show assumes a poignant topicality through Melhus take on US war and antiwar movies which, at the very least since the war in Vietnam, glorify traumatised veterans who in reality are psychologically broken and have little chance of returning to the usual social networks of ordinary life. Even today, action movies attract an enthusiastic audience of millions. In real life, however, soldiers returning from battle find it hard to shake off the haunting nightmares of their experiences of war. In his most recent pieces Melhus addresses a situation, which the wars in Iraq and Afghanistan have thrown into sharp relief in Germany, too. Thus the title of the exhibition results from the most recent projects concerning this issue and refers to video works such as “Deadly Storms” (2008), and “Hecho en Mexico” (2009).

The exhibition will include among other things a movie theatre screening four films from Melhus„cinematographic work of the last 15 years. Further works such “I do not belong in this House” and “I’m not the enemy” are partly staged or presented in large projections. A catalogue including essays by Katja Blomberg, Felix Laubscher and Bjørn Vedder will be published in German and English at Verlag Walther König, Cologne (€ 16,80).