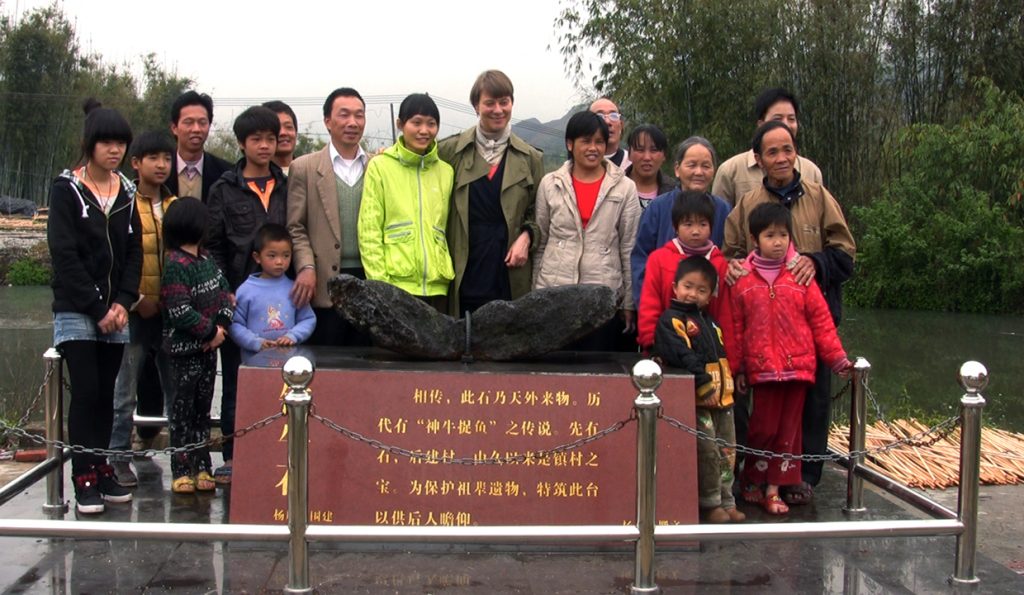 The video work The Meteorite is part of a series of philosophical conversations about “talking” objects. Antje Majewski travels with meteorite researcher Lu Ling to the Chinese village of Yang Wu Sha, which keeps a large meteorite, called the “Iron Ox”, for centuries.

The inhabitants tell the artist that the meteorite was discovered during the founding of the village. The principles of Feng Shui demanded water, so the villagers built a fish pond. While digging up the earth a meteorite was found. The community then decided to place the rock in front of the ancestral temple. For many of them, the meteorite symbolises good luck and protection from evil forces. Others, however, see it above all as a source of misfortune, referring to the surface mining in the nearby zinc-lead mines, which are progressively polluting the groundwater. Thus, the village is on the verge of being relocated by the government.

Antje Majewski (*1968 in Marl) lives and works in Berlin. From 1986 to 1992 she studied art history, history and philosophy in Cologne, Florence and Berlin. Majewski works with painting, video and performance, often in collaborative contexts. Her works are based on anthropological questions, which she relates to concrete cultural and historical situations. Since 1991, she has had numerous solo and group exhibitions, including at the Kestner Gesellschaft Hannover 2020, Gropius Bau, Berlin 2019, Hamburger Bahnhof, Berlin 2018, Centre for Contemporary Art, Tel Aviv 2016, Villa Romana, Florence 2012 or Kunsthaus Graz, 2011.