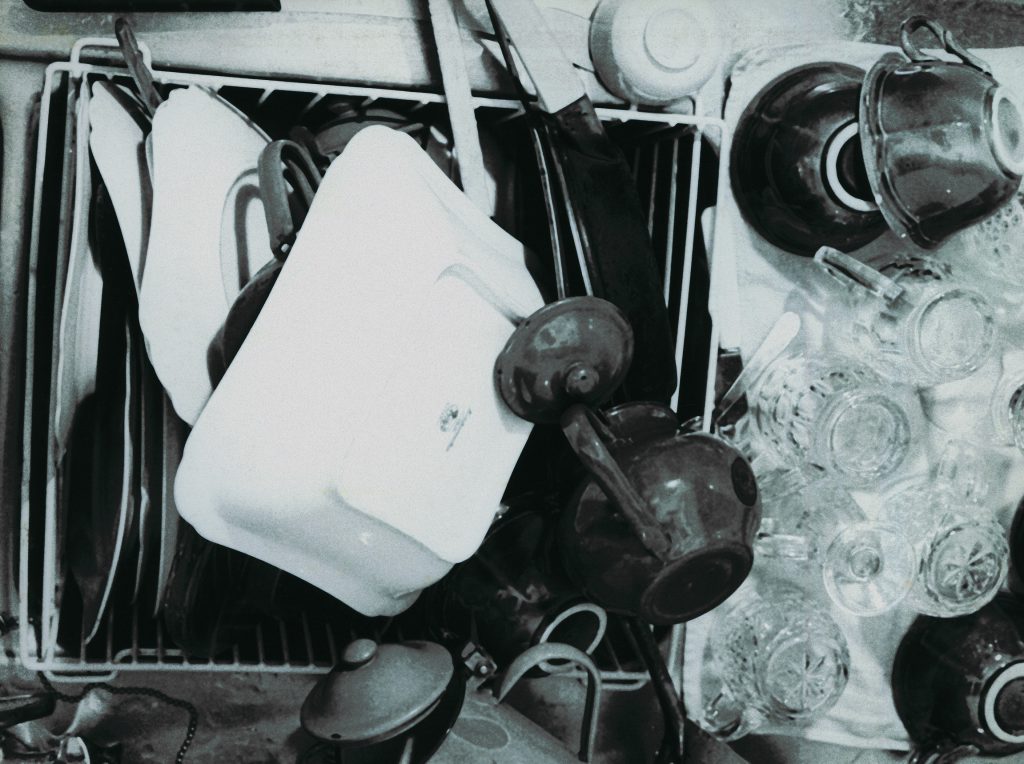 To be read stuttering:

In the spring of 2023, the Haus am Waldsee presents the first comprehensive retrospective of Berlin-based artist Margaret Raspé (b. 1933 in Breslau), who created a significant body of artistic work in the immediate vicinity of the Haus am Waldsee over the past five decades. In her practice, Raspé developed an ideosyncratic artistic language that considers life and art and their everyday conditions in unison.

In addition to important film works from the early 1970s, Raspé`s oeuvre consists of performances, photo series, sound works, and large-scale installations in both indoor and outdoor spaces. The investigation of perceptual processes is central to her practice. Ephemeral approaches that respond distinctly to their environment are employed to investigate given and societal structures, using lived realities as a starting point.

As early as 1971, Raspé developed the so-called “camera helmet” before these were industrially available: a construction site helmet equipped with a Super 8 camera that captures the exact central perspective of the artist’s gaze and enabled her to film her everyday life. The resulting films show the artist performing automated everyday tasks, including housework. Raspé can be seen in clinical detail whipping cream into butter in Der Sadist schlägt das eindeutig Unschuldige (1971), baking a cake Backe Backe, Kuchen (1973) or washing up Alle Tage wieder – let them swing! (1974). Besides lending visibility to the often invisible, everyday tasks, they also bear witness to the mostly unconscious physical processes at work. These automated actions are sometimes violent in their transformations but equally banal. The automatic is examined as a process between the conscious and the subconscious, between cerebral and manual work, the body as a programmable ‘Mensch-Maschine’ (human machine) or as a ‘Frautomat’ (female robot), in which the camera helmet acts as a prosthetic extension of the body and enables the viewer to experience the artist’s own perspective universally mirrored.

The exhibition juxtaposes the early films with later works by the artist that address issues of ecology, sustainability, theories of perception, spirituality and healing. What they share in common is the search for other forms of knowledge production and the awareness that our everyday environment is imprinted in the bodies, beings and objects that surround us. Raspé opened her house and the adjoining garden in Rhumeweg in Berlin-Zehlendorf already early on as a place for discursive artistic exchange. Artists, academics, authors and activists from primarily the Vienna Actionist and the Wiener Gruppe circles as well as from the Berlin Fluxus scene were closely connected to the house and regularly came together for artistic and social formats composed by Raspé.

The exhibition is accompanied by a catalogue designed by HIT Studio

The exhibition is supported by: