All we possess possesses us, too 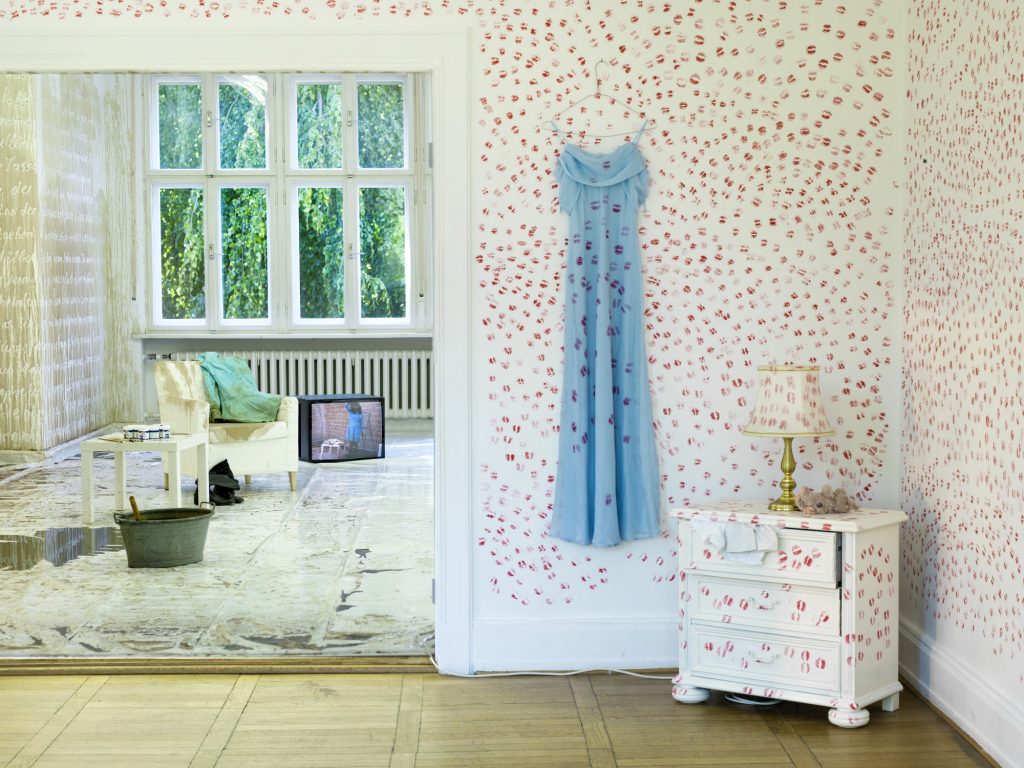 Nezaket Ekici (b. 1970, Kirsehir, Turkey) has taken over the entire Haus am Waldsee with her performances, installations and video documentations. The exhibition “Alles, was man besitzt, besitzt auch uns” (Everything we possess possesses us, too) was the first retrospective of the internationally acclaimed, multiple award-winning performance artist and master student of Marina Abramović at a Berlin art institution.

For almost 15 years Ekici has pursued performative and participatory strategies in her artistic practice. In doing so she consistently faces up to the image of a woman and an artist between cultures. Born not far from Ankara, socialised within the narrow circle of her Turkish family in Germany, she explores the limits of what is physically possible in her projects – whether she wears a chador and hangs upside-down in front of an audience reading diary entries, newspaper articles and passages from the Qur’an (“Permanent Words”, 2009), or when she publicly kisses the walls, floor, furniture and ceiling of an exhibition space for days on end, in order to express her appreciation of all that is overlooked or only too obvious, what we have become fond of or what is intimate (“Emotion in Motion”, 2000). The artist radically commits her own body to her artworks, for example when she swirls herself into a trance in a sea of blossoms for more than thirty minutes like a dervish (“Wirbelrausch”, 2008).

In other works she interprets paintings seminal to the history of European art (“Short but Hurting” 2007 after “Judith Beheading Holofernes” by Michelangelo Caravaggio, 1598), gets taboos and traditional rituals from the Islamic world in her sights, for example when she dons Lady Justice‘s blindfold, a black negligée and yellow rubber gloves and wallows in pork meat, wrenching inter-religious perspectives wide open (“Flesh, (No Pig but Pork)”, 2011).

The works on display were placed in relation to the functions of the rooms of a former residential home. Thus the entrance hall has house photographs from Ekici’s family life. A former boudoir was turned into a bedsit for adolescents. In “Emotion in Motion” the artist has taken possession of it by covering it with kisses and patterns in an action lasting several days. This is recorded in a documentary video that was on display for the duration of the show.

“Wirbelrausch” (2008) addresses the idea of universal love. “Lifting a Secret” (2007) was set up as a coffee parlour in the erstwhile study. A wall-inscription in coffee-tinted petroleum jelly becomes visible, a Turkish matchmaking ritual emerges as something entirely comprehensible. In a room a great banquet table was laden with 99 plates carrying 99 pearls. The pearls are the beads of a rosary signifying 99 commandments, duties and interdictions of various religions. The artist brought these alive in a performance on the opening night of the exhibition (“99 Commandments”, 2013).

Every house must have its carpet. In this case it was a tapestry in the former dining room. The ornamental grid was derived from a multiplied photograph showing the artist during a performance in 2011: “Living Ornament Carpet”. In another rooms we have seen a bath tub with a video projection and the video documentation of the performance “Porcelain”. Finally, Ekici conceived of a new work for the outdoor space around the lakeside, a work that she has performed in public on June, 14th.

The show was rounded off by numerous events such as dialogue-based guided tours, live-performances, an artist’s talk and an artist’s dinner.

A catalogue, including an essay by David Elliott, has been published in German and English by Verlag Walther König.

Supported by the council of Steglitz-Zehlendorf of Berlin; Capital Cultural Fund; additional funding by the Governing Mayor of Berlin – Senatorial Office – Cultural Affairs; the association Friends and Supporters of Haus am Waldsee e.V.