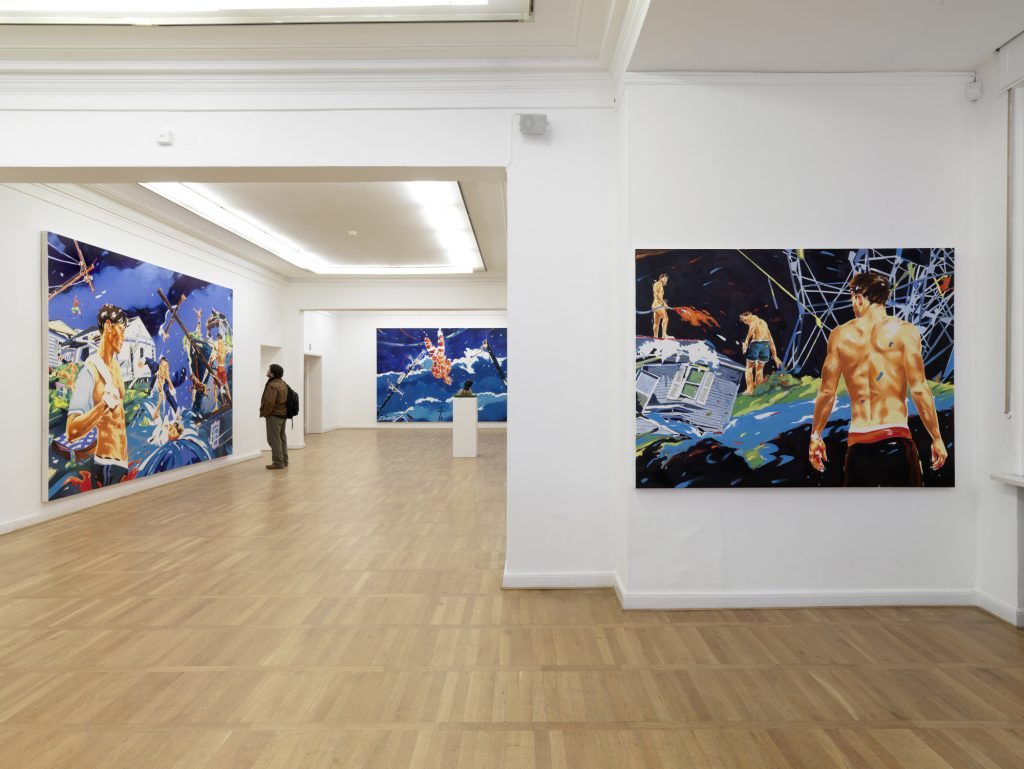 Under the patronage of Christina Rau – president of the foundation board, Künstlerdorf Schöppingen

The Haus am Waldsee dedicates its large institutional exhibition with Norbert Bisky to one of Germany’s most successful contemporary painters. In addition to admiring past and present works by the artist, visitors to the exhibition are offered a rare opportunity to contextualise Bisky’s creations, viewing works by those contemporaries who exercised an important influence on his oeuvre. In Bisky’s case, these include Jim Dine, Georg Baselitz, Walter Leistikow, K. R. H. Sonderborg and Katharina Grosse, Anthony Goicolea or Nicole Eisenman.

While the realist paintings by the artist count among the most sought after properties on the international art market, the reactions of the institutionalised art criticism in Germany are rather muted. We are faced with the phenomenon of a divided reception such as we hardly ever encounter with contemporary painters of Norbert Bisky’s calibre. What is it that brings about the fascination on one side and the scepticism on the other? The exhibition at Haus am Waldsee aims to get to the bottom of this matter. A controversial body of work is to be presented for the first time in the wider context of its relations and at the same time put up for debate in a public forum.

At first glance, Bisky’s early paintings resemble pop variations of Social Realism. Blond, blue-eyed boys, well-toned naked bodies and youth in all its sporting talent appear to confirm this cliché. After all, Bisky’s candy-coloured palette still appears to attest to the apparently artless world of light-hearted youth. However, upon closer inspection, the smooth surface of this alluring illusion is lacerated by crevices as destructive as they are deadly. Bisky exposes the underbelly of a youth culture rapidly sinking in a mire of consumerist nightmares. Cannibals devour body parts or trainers, young men urinate, fornicate, become inebriated, pillage and plunder. Yet they do not seem to be emotionally involved at all. In this way, Bisky ironically overstates experiences from a GDR childhood nourished by slogans of power and healthy youthfulness. To borrow Christoph Tannert’s felicitous phrase, Bisky treats the “face of the socialist epoch”.

Norbert Bisky, who was born in Leipzig in 1970, has lived in Berlin since 1980. After completing his studies at the Berlin University of the Arts, he was awarded scholarships to continue his work in Madrid and in the artist’s village Schöppingen in North-Rhine-Westphalia. From the year 2000 onwards, his exhibitions have taken him all over Europe as well as to Korea, China and the United States.