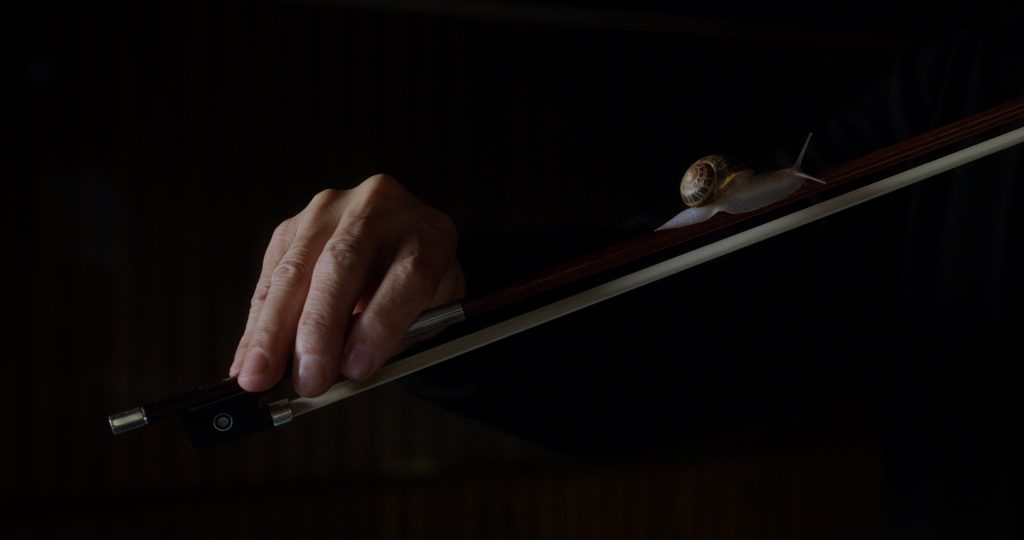 A garden snail crawls slowly along the length of a viola bow as a musician synchronizes tempo and rhythm of Igor Stravinsky’s Elegy for Viola Solo with the snail’s speed. The viola is played by Gérard Caussé, one of the best violists in the world. He plays on one of the oldest instruments in existence. The sliding of the snail affects not only the length of the piece, but also the stability and playing technique of the violist. The musician must avoid any abrupt movement in order not to lose the animal with its unstable balance. Through the new arrangement, the tactile interaction between the musician and the snail, Stravinsky’s Elegy becomes a joint journey towards a new interpretation.

Anri Sala (b. 1974 in Tirana, Albania) lives and works in Berlin. Since his early works, Sala has attached a growing importance to sound, creating remarkable works in which he recasts sound’s relationship to the image. Linked to this development is his long-standing interest in performance, and particularly musical performance. Anri Sala has exhibited internationally for many years, with solo shows at the Mudam, Luxembourg (2019); Haus der Kunst, Munich (2014); the 55th Venice Biennale (2013); the Centre Georges Pompidou, Paris (2012); the Serpentine Gallery, London (2011); the Contemporary Arts Center, Cincinnati (2009); the Museum of Contemporary Art, North Miami (2008); and the Fondazione Nicola Trussardi, Milan (2005); among other venues, as well as participating at the Documenta 13 (2012).