In the current exhibition “New Normals”, industrial designer Konstantin Grcic creates constellations from his designed objects and everyday materials that awaken the viewers’ own ideas of possible future perspectives. In this digital series, we want to further explore how diverse future-oriented design can look like by presenting various designers’ approaches and visions.

Johanna Seelemann (*1990) is a German designer whose practice explores everyday objects and materials in our environment and their backgrounds. The results of those explorations are always formulated as optimistic suggestions and proposals that make alternative future scenarios imaginable.

On 7 May 2022, a design symposium with Konstantin Grcic, Johanna Seelemann and Studio Œ will take place at the Haus am Waldsee on the topic “Practising Design. How does relevant design emerge today?” The event is hosted by the curators of the exhibition, Anna Himmelsbach and Ludwig Engel.

If materials could speak, what would they tell us? Would they tell us about their origins, their journeys, the places and people they met and all the knowledge in numerous minds that it took to shape them as they are now? Would the materials think that we formed them, or they us, our culture and society? Where would we be if even one of them did not exist? Now, when different materials are bundled into an everyday product that sprang from the global network of supply chains, isn’t it questionable how “normal” our everyday objects can be anyway? Think of a simple banana, a loaf of bread, an aluminium can or a car.

I often question what it means to create a product in my work as a designer. Every material has a history and it fascinates me to explore it. You don’t just create a usable object as a designer but shape the interrelationships of landscapes, living beings, transport routes, actions and visions with every decision in the process.

A few years ago I lived in Iceland for a while. Like everywhere else, increasing food waste in supermarkets became an increasingly discussed issue, as food had to be discarded due to expiry dates. In Iceland, where the average annual temperature is the EU-recommended fridge temperature, it seemed particularly easy to spot perfectly fine fruit and vegetables in the bins outside. An Icelandic friend called Björn Steinar Blumenstein and I wanted to investigate this and were indeed confronted again and again with vast quantities of mostly immaculate exotic fruit, especially bananas. 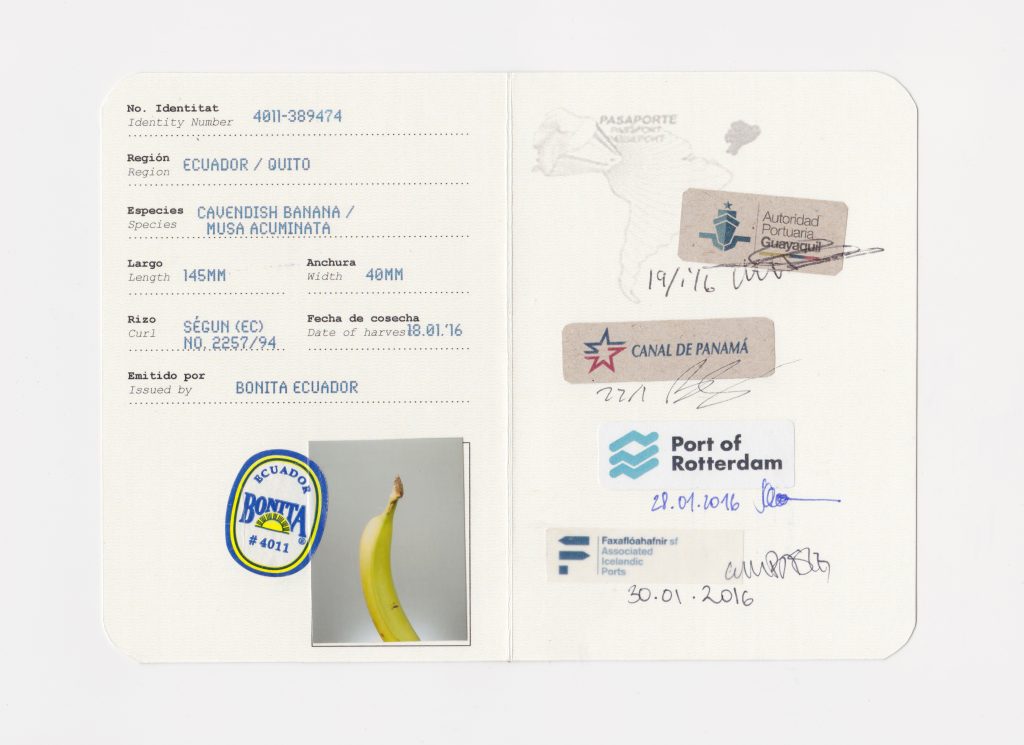 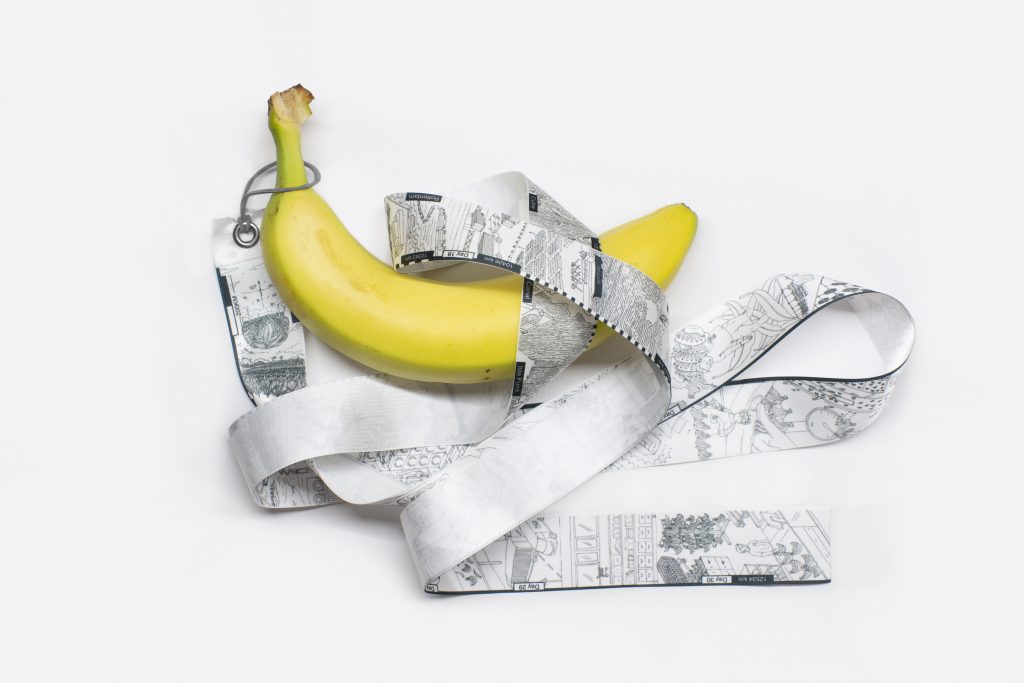 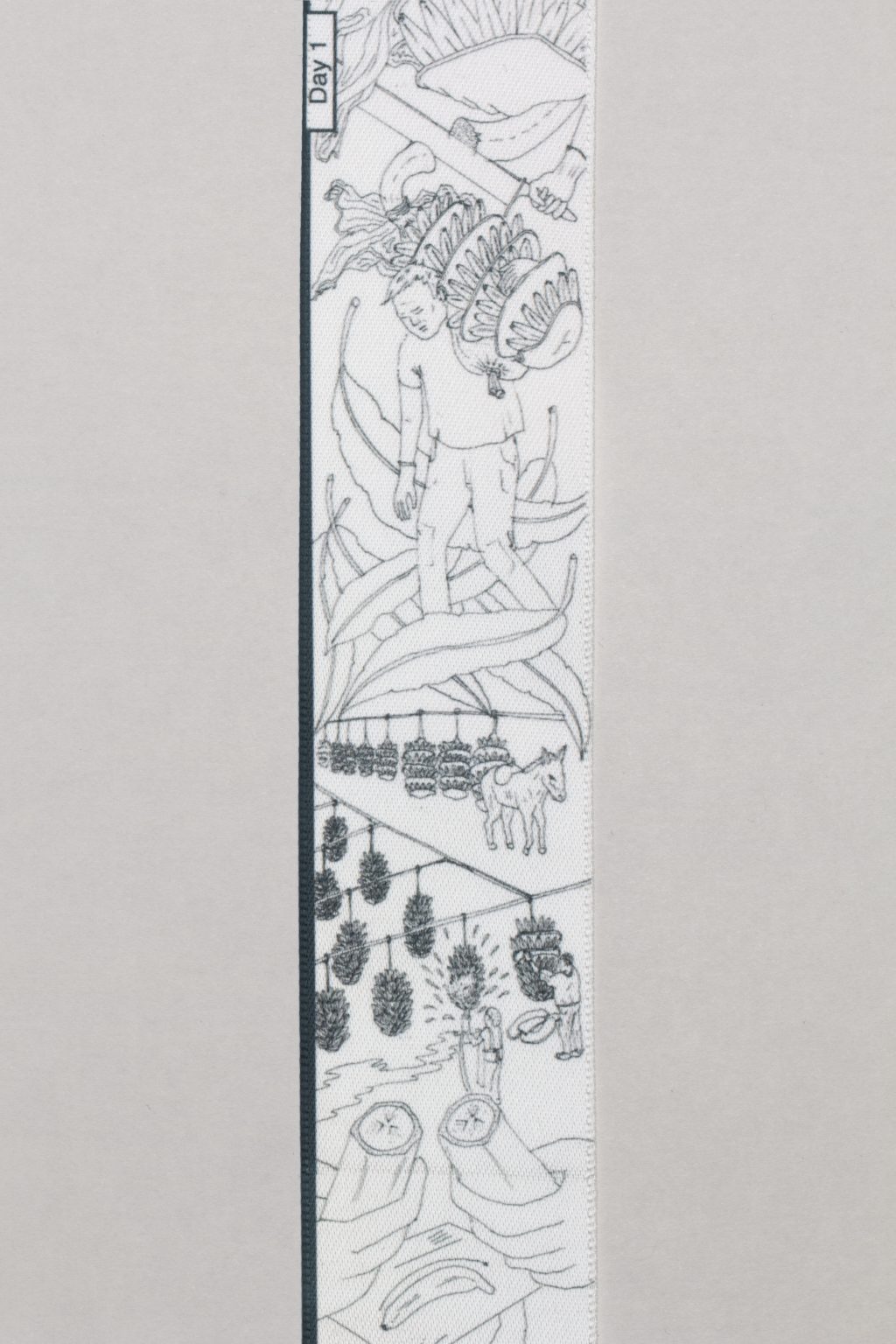 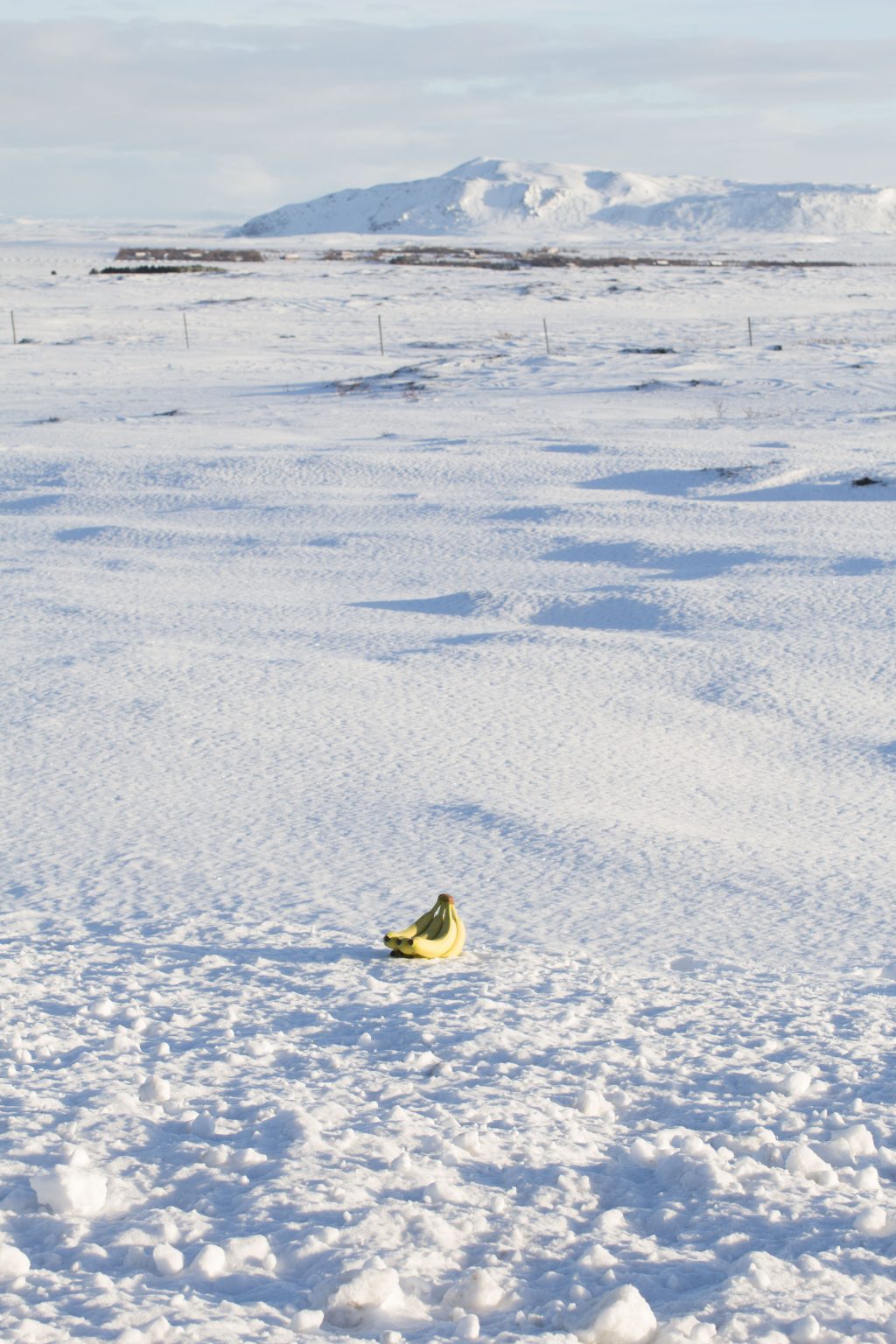 Now imagine a banana in the snowy desert of Iceland. We were puzzled, because just as a banana serves wonderfully as a representative of our fast-paced times, the fruit on an island in the middle of the North Atlantic seems just as out-of-this-world under closer inspection. Not to mention that the transport route from Ecuador to Iceland is only a fraction longer than that from Ecuador to Germany.

As aspiring designers, we wanted to understand the system that supplies us with things from the other side of the world on a daily basis at ridiculously low purchasing prices. So we met food importers and trading companies who told us that there were no seasons for fruit and vegetables anymore. If something stopped growing in one place, we would import it from another. The standardisation of transport and the container revolution of the 1960s were the engine that accelerated trade flows around the world, making it suddenly efficient to specialise in the production of individual products and trade them globally. It is this seemingly hidden space of trains, trucks and cargo ships between production and consumption that began to fascinate us.

From our explorations came a project we called Banana Story. We did not only design a passport for a standardised Cavendish banana from Ecuador with stamps from canals and transit ports, but also an unusually long made-in label. The label illustrates how the produce travels about 12,534 km in about 30 days on a cargo ship, passes through 33 different pairs of helping hands and gets from Guayaquil to Reykjavík to the supermarket. A kind of seamless made-in label that we would like to see for all everyday products.

Design can also be a space for exploring what is not based on measurable data or strictly functional. Instead, it speaks to sensory perceptions, habits, symbols, rituals, emotions or identity. A product itself can become an object of conversation by questioning values, offering a counter-example or presenting unconventional points of view. But a designed object can also be utopian, like the prop of a wishful thinking, as a trace of a future that has not yet been achieved but is worth striving for.

Germany’s export hit, the car, caught my attention a little later. The automotive industry has a key material that has been used for over 100 years to develop and perfect the shape of car bodies. Every curve of a new car model is first formed by hand, on a scale of 1:1, from MarsClay, a dimensionally stable, tear-resistant and age-proof modelling clay. With the intention of selling a new step in an inevitable evolution, a car body is worked out, components aesthetically reworked, always with the unique selling points of the respective brand. And not infrequently, the technological aerodynamic evolution is nevertheless subject to the visual, aesthetic innovation. The properties of MarsClay inspired me to reverse its functions. Instead of using it as a prototype material, it was to become the product material itself. 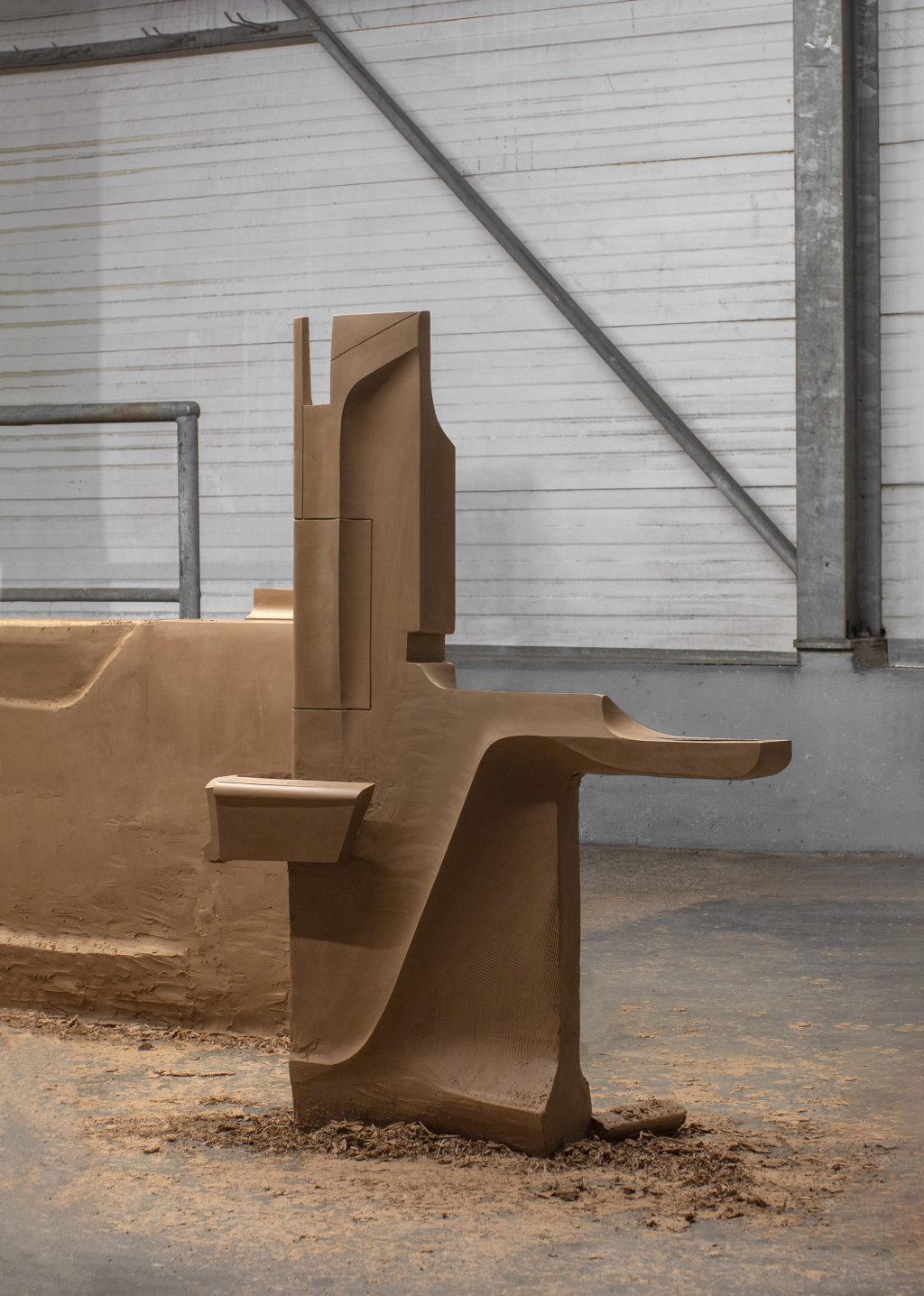 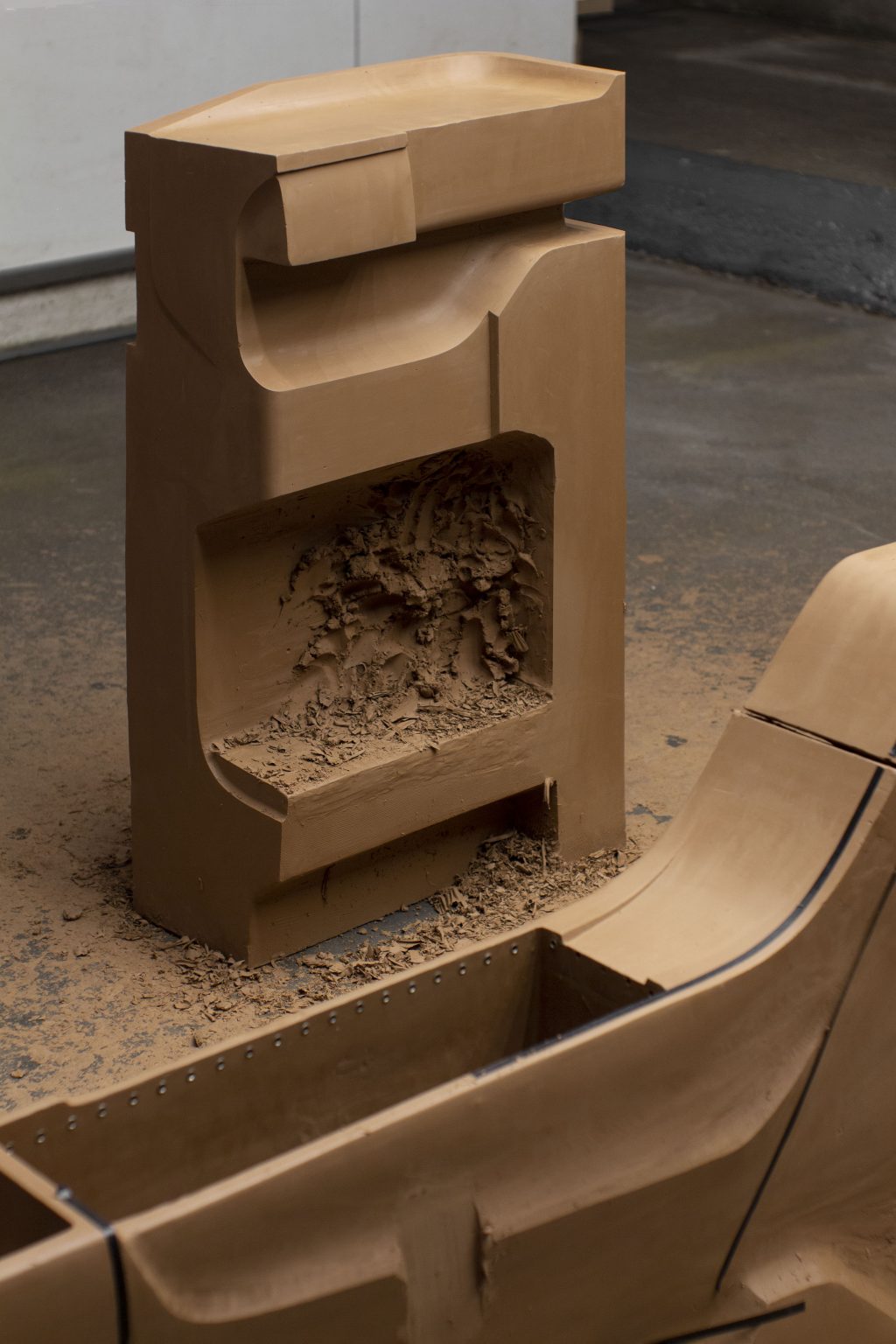 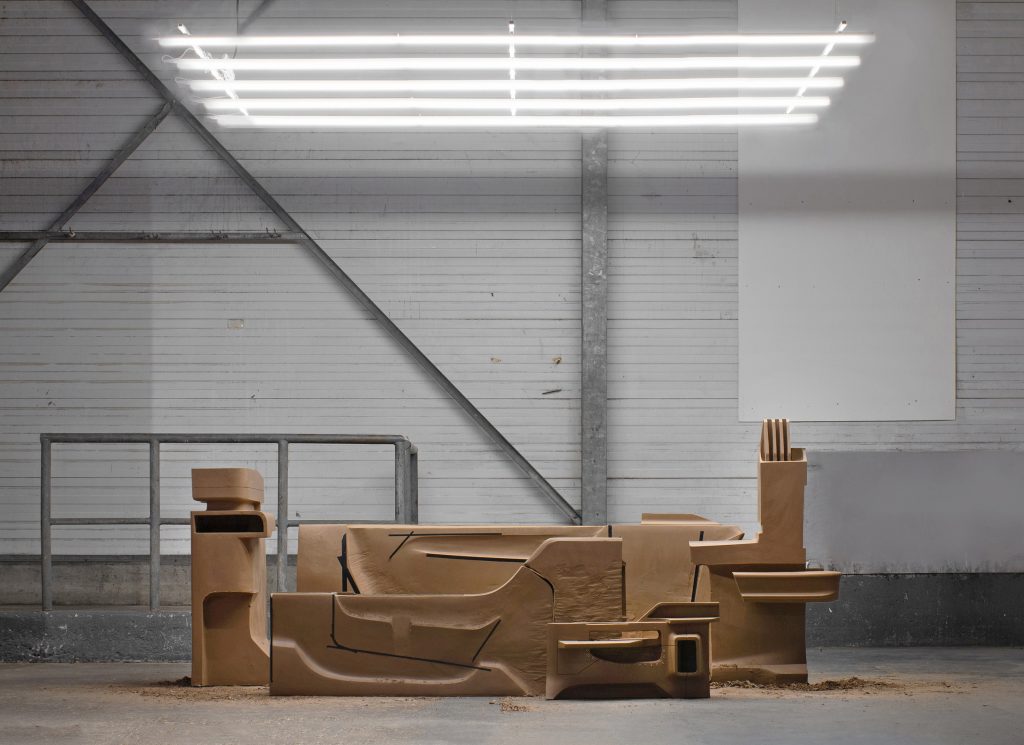 Terra Incognita is a collection that takes a constant transformation of styles and aesthetic languages into account, while at the same time allowing for adaptations and changes through its materiality. The idea is that change and desire for adaptability is an inherent quality of the product. Instead of replacing an old product with a new one, it can be deformed and transformed. Any materials scraped off for transformation purposes can be heated, shaped and added back, adapting the object to use and style. While I developed the concept, explored it theoretically and produced the collection, the formal language of the abstract furniture-sized objects refers to concept cars and was developed and refined in collaboration with car and product designer Daniel Rauch.

“Exchange, resilience and adaptability” are some of the terms that increasingly drive my projects nowadays. These three words are united by the way we deal with change and impermanence. Change is planned or unexpected, natural or artificial, short or long term. Nothing is permanent. And our metabolism of material seems to be constantly accelerated by changes in culture and society. Lifestyles, habits and tastes change, new identities and relationships emerge and with them desires and needs. 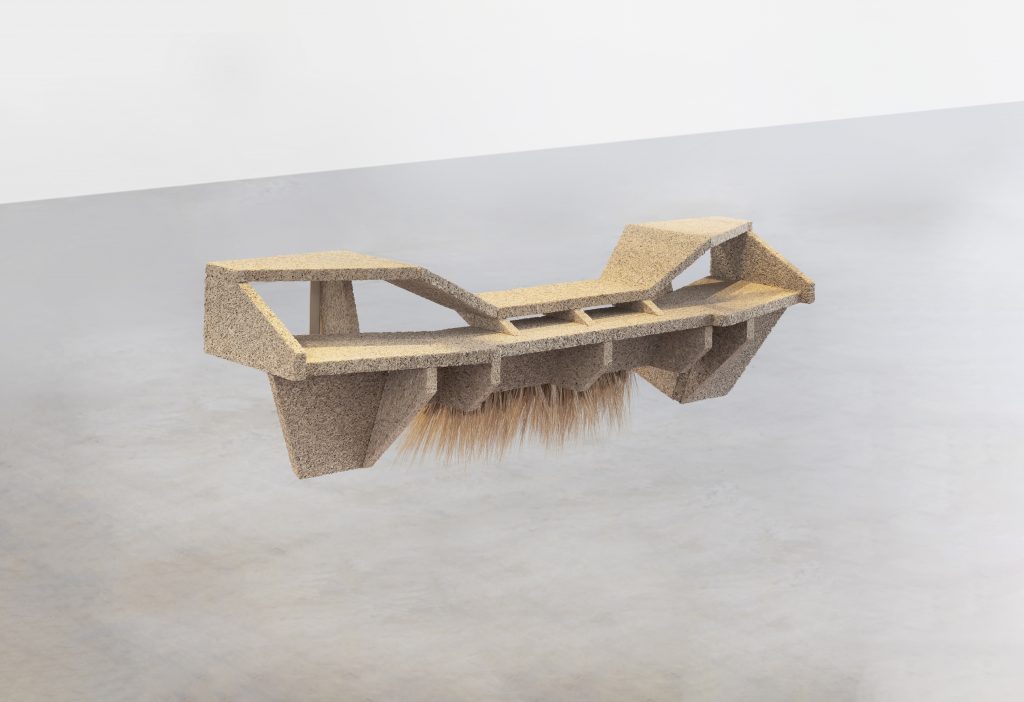 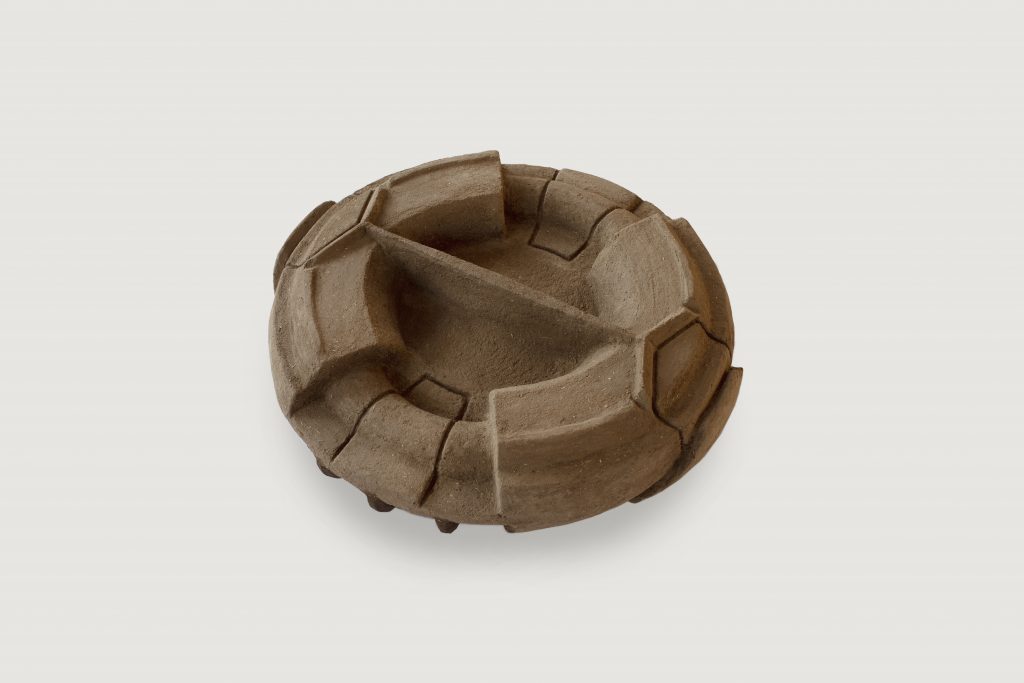 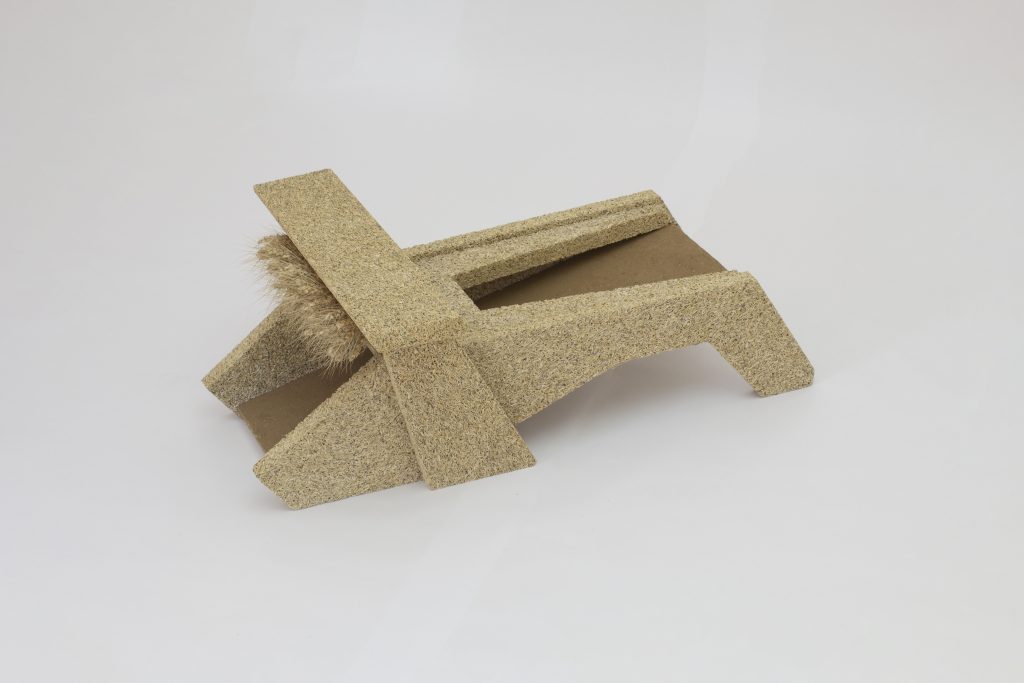 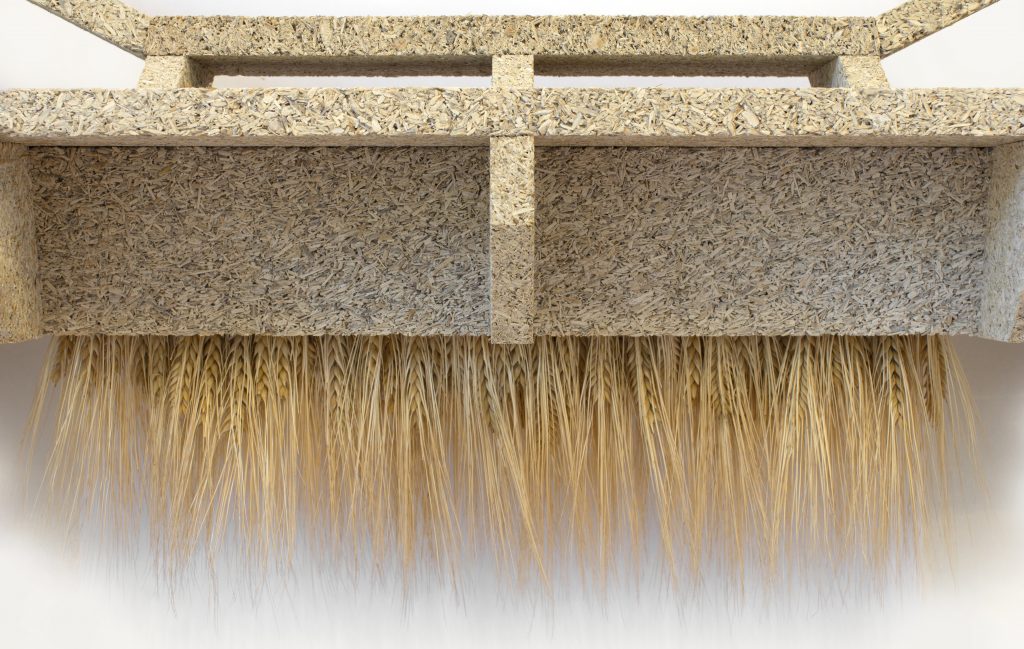 My latest project Hortulanus explores the question: How can we design healthy ways of production and consumption? Hortulanus is made of well-known, locally found materials such as straw, ears of corn and clay, as well as local architectural techniques and harvest rituals, which ought to be rethought for the future. They are compostable pieces of furniture that contain hardly any grey energy and do not have to be transported far. They are not meant to last forever, but to have a deliberately limited lifespan, incorporating maintenance and decay into their design, which in turn can be playful almost wasteful. They also take aim at how large or small material circuits actually are. The design language of the Hortulanus speaks to an aesthetic that has long been associated with high-tech, and proposes to incorporate nature-centred alternatives and ancient knowledge into our visions of the future. Imagine if our consumption had no negative impact on this planet – on the contrary, we left no or sheer positive footprints with our actions.

My designs exist as ideas, which playfully and hopefully suggest a “What if…?” and want to equip the everyday for a desirable future at the same time. 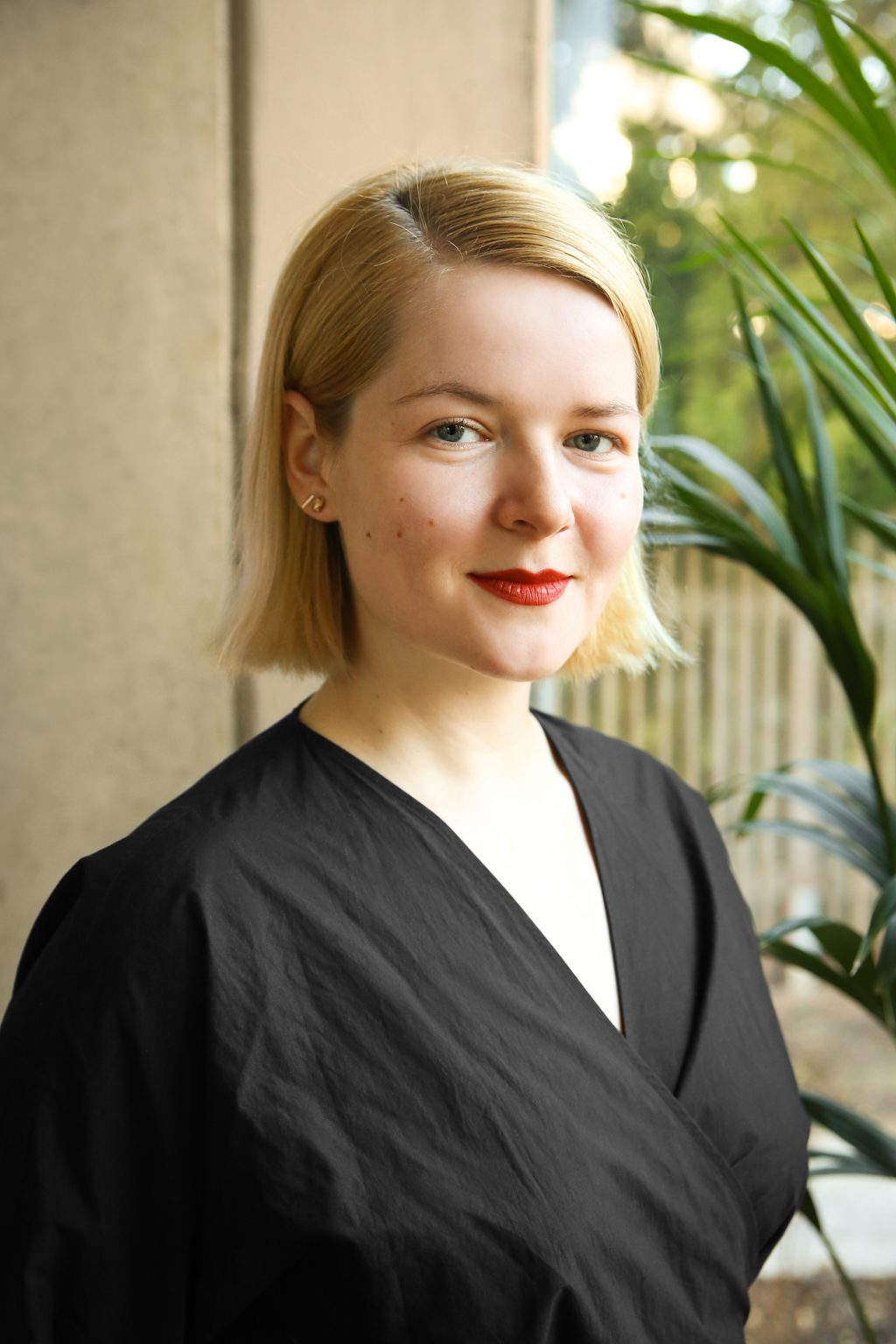 Johanna Seelemann studied Contextual Design at the Design Academy Eindhoven as well as Product Design at the Icelandic University of the Arts in Reykjavík, where she has been teaching since 2020. Previously, she supported Studio Formafantasma in the projects Ore Streams and Cambio.