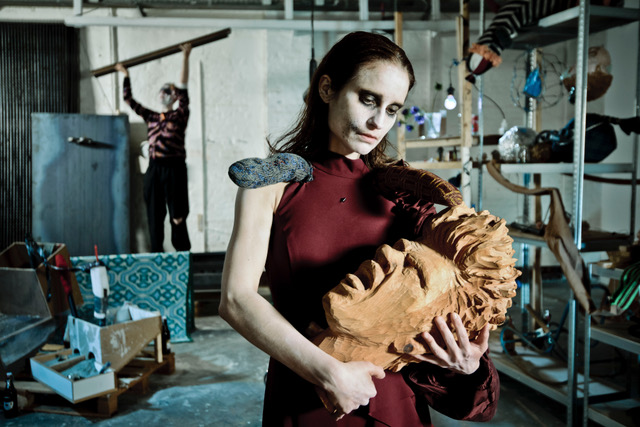 John Bock’s video work Buhlschaft deals with the centrepiece of the Salzburg Festival, Jedermann. The performance focuses on the character of Buhlschaft, played by Berlin based actress Lea Draeger, and Jedermann, embodied by John Bock himself.

With text fragments from the original play and passages rewritten by the artist, the play is reflected on a meta-level, the significance of the Jedermann for acting, the role of all roles offered only to the very most established actors. As a counterpart to this, the female lead, the Buhlschaft, who does not have to put up with the 30 sentences provided for in the play text, John Bock has added new ones for her.

The set consists of several objects that are used by the two protagonists. In this way, John Bock’s collaging method is applied to the various parameters of the well-known play with regards to character, text, costume, props and stage design and gives rise to a new set-piece like work, which comments on Jedermann as a phenomenon, challenges it, steers it in new directions and leads it ad absurdum.

John Bock (*1965 in Gribbohm, Schleswig-Holstein) has lived and worked in Berlin since 1997. Initially known for his spectacular, comically grotesque lectures, Bock steadily expanded his forms of expression. His sculptural environments demonstrate an exuberant presence of material and increasingly serve as film sets in which actors bring the numerous objects to life. The viewer is confronted with an overabundance of meanings, which are also provided with countless artistic, scientific and biographical references on the linguistic level through the word creations developed by the artist.