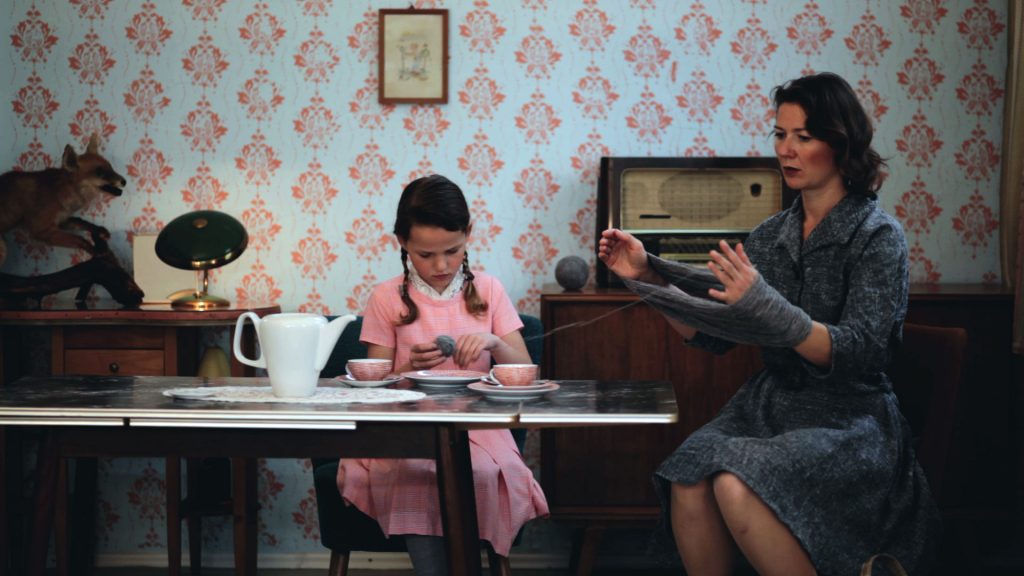 The film deals with the desire of the late 1950s for a new beginning, recovery and forgetting the horrors of the war and Nazi era in Germany. Many families kept silent about the violence they had experienced and preferred to repress the past rather than deal with it.

In her video “Die Faust”, Veronika Veit takes a close look at a mother-daughter relationship. The scene is set in a middle-class 1950s interior. The artist highlights the relationship of her two protagonists in detail: the mother holds a tranche of wool that the around 10-year-old daughter is winding into a ball before it can be knitted. At that time, knitting still stood for a typically female activity. Mother and daughter are connected by a grey thread. While the mother follows convention without resistance, defiance resonates in the child’s posture.

As if out of nowhere, a male fist hits the table and leaves a wriggling fish lying there. The tension between father, mother and child is almost unbearable. There is no clarification of the brutal situation in sight. The child is obedient and finally hands the mother the lipstick after she has bitten off the head of the disturbing fish. Slapstick and bitter seriousness merge in this video. It appears as a short statement on the dysfunctional relationships of German post-war families that still have an impact today.